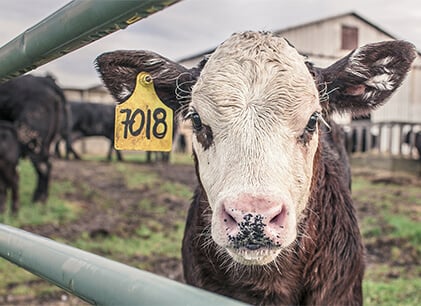 Raising beef cattle has become a major part of the US economy. The United States is the world’s largest producer and per-capita consumer of beef, and beef production makes up more than 35% of all US farming – the largest percentage of any US agricultural market.

Behind every steak is years of effort on the part of dedicated breeders, ranchers, and other cattle-raising experts and professionals. Over the past one hundred years, major advances in technology and our understanding of cow biology have led to big changes in the cattle industry.

The keys to successful cow-calf operations are two-fold.

The first key is selecting bulls and heifers for mating that display desirable traits for beef cattle. These traits are then passed down to their calves (young cattle). The other is to trace bulls and heifers’ full bloodlines. A bull or heifer’s breed can make a major difference in the quality of calves they produce. Some breeds of cattle, such as Wagyu or Black Angus, have highly sought traits that breeders seek to preserve by mating them with other members of their breed. Breeding cattle based on genetic traits is usually referred to as selective breeding.

The second key is making sure that calves are well-cared for and survive their early months. Making sure calves are looked after and well fed – first by their mothers, and then by subsisting on roughage – is essential to keeping them healthy and producing strong beef cattle.

Backgrounding is often performed by cow-calf operations with sufficient resources and acreage, though independent backgrounding operations do exist. Calves backgrounded to be sold to feedlots are referred to as feeder cattle.

The primary goal of backgrounding is to raise weaned calves – meaning those who no longer require their mothers for food – to the proper weight for feedlots. Backgrounding involves releasing beef cattle into pasture, where the cattle continue to subsist on pasture grass and roughage. Once calves have reached sufficient weight (about 650 pounds), they are usually sold through auction or a local calf sale.

When a calf is purchased by a feedlot operator, it is brought to that operator’s farm. As feeder cattle do not subsist on grass at a feedlot (also called a feedyard), feedlots generally require far less space than cow-calf and backgrounding operations. Instead, feeder cattle at a feedlot are given a high-energy, high-protein mix of corn, grains, and roughage that is designed to increase feeder cattle muscle mass and marbling, the keys to a thick, juicy, and buttery-tasting cut of steak.

Feeder cattle usually spend around 200 days in a feedlot before being sold for slaughter. During that time, they gain about 400 pounds of muscle and marbling mass. Their corn-based diet also gives their meat a slightly sweeter taste and more tender texture. This is the quality restaurants and meat dealers are describing when they say a piece of meat is corn-fed.

From Feedlot To Plate After their time in a feedlot, feeder cattle are then sold to slaughterhouses, where they are butchered into cuts like NY strips, sirloins, and rib-eyes. This is also where the USDA determines whether cattle qualify as USDA Prime, Select, or Choice. To learn more about how the USDA rates your meat, click here.

Creating the Perfect Slow Cooked Beef
Did My Steak Go Bad? Tell-Tale Signs It's Not Safe to Eat
How to Cook Picanha Steak