So many cuts, so little time! Here at Steak University, we know how confusing it can be to learn the differences between the many cuts of steak out there. That’s why we’re dedicated to making the learning process as simple as possible for you by comparing some of the most popular cuts of steak, so you don’t have to. This brings us to prime rib vs ribeye: two amazingly delicious cuts that are must-haves on any steak menu.

One of the things that we get asked often is, “Is prime rib and ribeye the same thing?” or “Prime rib vs ribeye – which one is best?”. Our answers? Prime rib and rib eye are similar, but no, they aren’t the same, nor is one technically better than the other. Both rib eye and prime rib are excellent steak cut options for different purposes. They’re both incredibly flavorful, have fantastic marbling, and are both prime beef options with just the right amount of fat to improve taste and texture.

Unlike some of the other steak cuts we prepare, these cuts of steaks come from the same primal cut of beef. A ribeye is the section of the rib roast that is cut before being cooked, but let’s dig a little deeper to find out more about each cut and each difference that separates them.

What is Prime Rib, and Where Does It Come From?

Prime rib is also known as a standing rib roast. The roast comes from the same part of the animal that the ribeye does: the primal rib section. If you are at a restaurant and ask for the prime rib you will get a slice of meat from the cooked roast most likely. It is also important to note that although prime rib contains “prime” in its name, this does not mean that it is USDA Prime beef. Be sure to double-check the grading of your beef before you purchase it to make sure you’re actually buying USDA Prime beef if that’s what you’re after.

The prime rib is well-marbled throughout its meat, meaning that it has a decent amount of fat content that renders down as it cooks to keep the beef tender. A popular way to cook the rib is with au jus, or in its own juices, to prevent it from getting dry during the cooking process as it reaches your desired temperature.

What is Ribeye, and Where Does it Come From?

You may see ribeye referred to in several ways, like ribeye or rib eye and rib steak. Don’t get too hung up on the names; the ribeye has many names, but they all generally refer to the same cut. As stated earlier, this cut comes from the rib area of the animal, hence the “rib” portion of its name. The cut is from the rib roast, aka prime rib. To be considered a ribeye, the steak must be cut before the roast is cooked. The cuts are then sold as ribeye steaks. Prime rib cuts are larger than ribeye cuts since they include the ribeye and the bone.

The rib eye cut is also where you can find the coveted and oh-so-flavorful-and-tender rib cap (you can read more about that here). This piece is also known as the Spinalis Dorsi, and it’s the most delicate part of the rib eye that you’ll eat. You will probably not find this smaller cut at the grocery store, but you might get lucky enough to have a local butcher who cuts it from the ribeye and sells it on its own, but you can bet that it’ll be expensive. 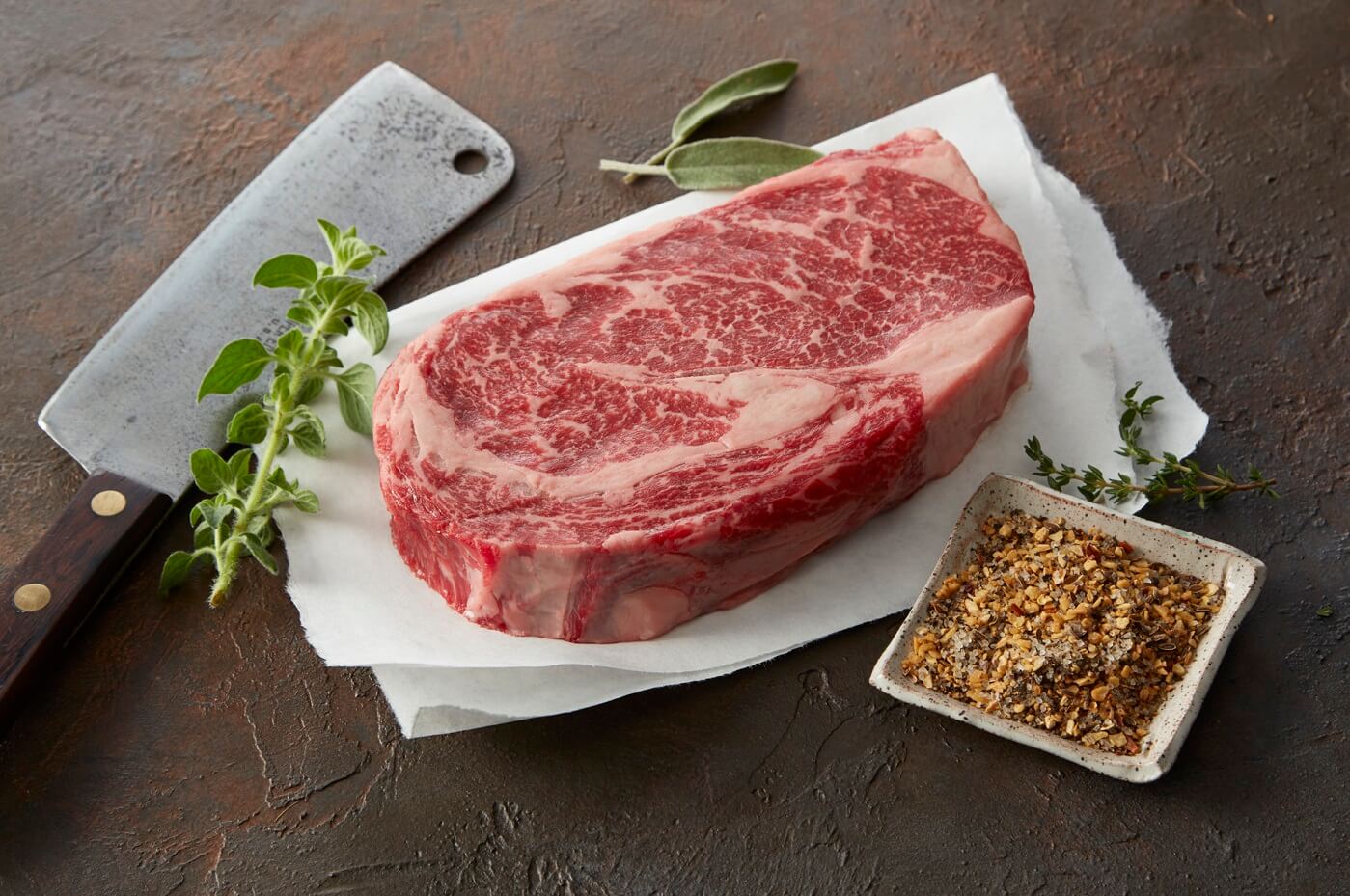 Now that you know the difference between the prime rib vs ribeye let’s take a look at pricing. Basically, this comes down to the type of cut, since ribeye and prime rib can be cut a few different ways. It also, of course, depends on whether you’re getting meat from a grocery store or from a butcher or specialty store. Butchers and specialty shops are going to have higher quality beef, generally, than grocery stores, which means you’ll pay more per pound for that quality.

Ribeyes can be bone-in or boneless, with boneless cuts generally being more expensive per pound than bone-in because they take more time and precision to cut the meat from the bone. Prime rib refers to the entire rib roast, which means one can cut desired portions from it. Prime rib will usually be more expensive if ordered at a restaurant.

Are Their Flavors Different?

Because the prime rib and eye portions are similar pieces of meat coming from the same part of the cow, you’re not going to find significant differences in their flavor. They’re both filled with rich, beefy flavors thanks to their fat and muscle content. However, the prime rib typically contains more bone and fat, which might give it a slight edge over the eye in terms of flavor. Bone-in ribeye, though, also benefits from the natural flavoring that comes from being cooked with the bone, so its flavor doesn’t stray far from the prime rib.

You’ll notice the most significant flavoring differences in how you choose to cook a beef ribeye or prime rib. While most people enjoy the eye with a little bit of salt and pepper and a reverse sear with some olive oil, the prime rib gets a bit more experimental. From broil to sous vide with natural juices, the prime rib has several cooking options that can change up the flavor quite a bit.

What About the Texture of Prime Rib vs Ribeye?

Again, both the rib eye and prime rib come from the same part of the cow, so the muscle and fat content in each is similar. Because those two factors contribute the most to a steak’s texture, you won’t find much of a difference between the textures of these two cuts until you cook them.

The way you cook a rib roast versus the rib eye will make them different. Some cooking methods don’t produce the sear that you’d get from a cast-iron skillet, for example, which will make the texture of each bite feel different in your mouth. Similarly, broiling or slow-roasting a roast will definitely produce a different texture than cooking the meat on the grill or in a pan.

Your choice of drink can also make a difference, believe it or not! Drinking water with your steak, for example, won’t have the same result as drinking a glass of red wine. Red wine contains natural molecules that sit in your mouth and help tenderize meat as you chew. This effect can work equally as well with both the rib eye and prime rib

Is ribeye the same as prime rib for cooking’s sake? It can be, but it depends on the way in which the ribeye and prime rib are cut.

Rib eye is generally cooked like a steak. That means you can grill it or pan-fry it to your heart’s content, and it’ll be just as delicious and full of beefy flavour no matter what you do. A few minutes on high temperature in a cast-iron skillet and seasoned with a little salt and pepper gives the eye a gorgeous, crispy sear and just the right seasoning. The marbling cooks down through the process to keep the cut tender and juicy.

A roast is different, though. You’ll want to make sure your roast is completely thawed and seasoned before attempting to roast it in the oven or grill it. Steak University offers easy instructions for roasting or grilling a prime rib roast.

As we mentioned in the previous section, you have a lot of options for cooking both ribeye and prime rib, but the prime rib as a roast has virtually innumerable options. One of the best ways to do it is to season it with salt and pepper and slow-roast it in the oven with low heat until it’s close to coming to temperature. Then, boost the heat for the last few minutes to sear the outside. It’ll cook thoroughly without getting dry while turning the outside crispy.

You can also cook prime rib sous vide, on the grill, in a crockpot or instant pot, or broil it with some au jus.

Wrapping it Up: Difference Between Prime Rib and Ribeye

We hope we’ve answered your questions about the difference between ribeye and prime rib. These particular cuts can be a bit confusing to understand because they’re often spoken about as two completely different cuts. In reality, they come from the same part of the cow.

Ribeye gives you the best part of the cut in a smaller portion; the prime roast gives you a larger cut that contains the ribeye area as well. Both are incredible cuts you’ll want in your steak arsenal. Check out Chicago Steak Company’s Ribeyes and Bone-In Heart of Rib Roast.

Want to learn more about each cut of beef? Here are some other articles that might help you:

What is the Difference Between Prime Rib and Ribeye Steak? Unlike some of the other steak cuts we compare, these cuts of steaks come from the same primal cut of beef. Prime rib is also known as standing rib roast. The roast comes from the primal rib section of the animal. If you are at a restaurant and ask for the prime rib you will get a slice of meat from a cooked roast most likely. Although prime rib contains “prime” in its name this does not mean that it is USDA Prime. The ribeye cut comes from the exact same rib area of the animal. The cut is from the rib roast, aka prime rib. To be considered a ribeye, the steak must be cut before the roast is cooked. Cost Ribeyes can be bone-in or boneless, with boneless cuts generally being more expensive per pound. Prime rib will usually be more expensive if ordered at a restaurant. Cooking Differences Ribeye is generally cooked like a steak. That means you can grill it or pan-fry it to your heart’s content. A roast is different, though. You’ll want to make sure your roast is completely thawed and seasoned before attempting to roast it in the oven or grill it. Wrapping it Up Ribeyes give you the best part of the primal rib cut in a smaller portion; the prime roast gives you a larger cut that contains the ribeye. Both are incredible cuts you’ll want in your steak arsenal!