Cut from the sirloin area of a cow near the place the T-bone and porterhouse come from, sirloin steak has plenty of the beefy flavor that steak enthusiasts yearn for. However, it can be relatively thin compared to some more robust cuts like the ribeye or tomahawk steak, so its texture is a primary concern when cooking.

To keep it nice and tender, we prefer using the reverse sear method rather than pan-searing sirloin steak. Reverse searing slowly brings it up to temperature in the oven and finishes it with a quick sear to lock in juices and flavor. Follow our guide to learn how to reverse sear sirloin steak in a few simple steps.

To get sirloin steak ready to reverse sear, start by salting it on both sides. Then, leave it at room temperature for 45 minutes before you’re ready to cook it to create a brine with the salt and allow it to rise a little in temperature. This will help it cook more evenly later.

A couple of minutes before your steak comes out of the oven, you’ll want to have a skillet ready to preheat. Drizzle oil in the skillet, and turn the stove on medium-high heat.

About 10 minutes before the brining process is done, prepare a rimmed baking sheet by spraying it lightly with cooking oil spray. Then, move an oven rack into the middle position in the oven before preheating the oven to 225 degrees 10 minutes before cooking.

Sirloin steak takes about one hour to reverse-sear to medium-rare, depending on how thick the steak is. If you’d like your steak more done than medium-rare, you’ll likely need closer to 1 ½ hours for a full cook.

Use the temperature chart below to determine the proper temperature for your sirloin steak based on the doneness level you prefer.

Medium-rare is the most popular cook for reverse-seared sirloin steak. To achieve it, set the oven to 225 degrees. Once preheated fully, place seasoned steaks on a rimmed baking sheet and into the oven to cook for 30-45 minutes. Check that the temperature reaches 125°F-130°F before searing in a preheated skillet for 2-3 minutes on each side. Rest steaks on a plate tented with foil for 5-10 minutes before serving or slicing.

We know you want all the insider tips you can get to reverse-sear sirloin steak just like the pros do it. Here are a few of our best tips:

How to Slice Sirloin After Reverse Searing

It’s common to slice sirloin steak after cooking it. Perhaps that’s your preference or you’d just like to learn how to slice larger pieces into smaller ones to split servings.

Avoid slicing sirloin steak before it rests for its full 5-10 minutes. This resting time is crucial to let juices absorb back into the steak rather than run out onto your plate. When slicing, go against the grain, which are the long fibers that run along the steak.

Use a Thermometer for Accuracy

We recommend using a reliable meat thermometer to check the temperature of sirloin steak after removing it from the oven. This determines whether the steak is at the right temperature and ready for searing, resulting in the ideal final temperature range for your desired doneness level.

Sirloin is available in multiple varieties, some much lower in price than others. However, price is often attached to quality when it comes to steak. You’ll want to steer clear of very cheap steaks, as they may not have the texture and flavor you were expecting.

Premium Angus, USDA Prime, and Wagyu are the highest quality sirloin steaks. Either of these labels include steaks with excellent marbling that reaches tender results. Also, look for aged steaks denoted by a dry-aged or wet-aged label. Aged steaks undergo a specific aging process over several weeks to enhance their texture and flavor. Check out our wet-aged top sirloin steaks.

Remove your steak from the refrigerator 45 minutes before you’re ready to put it in the oven. Then, salt it generously on both sides, using your fingertips to press the salt into the steak.

Move an oven rack to the middle slot in the oven before preheating the oven to 225 degrees. Spray a rimmed baking sheet with cooking spray.

Add steaks to the baking sheet. Add black pepper and your other choice seasonings to both sides of the steaks before putting them in the oven. Cook for 30-45 minutes, checking the temperature with a meat thermometer before searing.

Preheat a skillet over medium-high heat with a drizzle of olive oil. Transfer steaks to the preheated skillet, and sear for 2-3 minutes on each side until golden brown.

Place steaks on a clean plate or cutting board. Tent foil over the steaks as they rest for 5-10 minutes before serving.

Although the reverse sear method is one of our favorites for sirloin steak, it still has a few drawbacks. Here are a few pros and cons of reverse searing:

Pan-searing and reverse-searing use the same cooking methods — searing and oven-cooking — to achieve their end results. However, with reverse-searing, you reverse the typical method of searing and then finishing in the oven. Instead, start with the oven cook, which slowly brings the steak to the proper internal temperature to achieve a more even cook. Then, finish it off in a hot skillet for a fresh sear.

Can you reverse sear sirloin steak?

Yes, you can reverse sear a sirloin steak. Be sure to let the steak come to room temperature for 45 minutes before placing it in the oven for the best results.

How long does it take to reverse sear sirloin steak?

In total, expect reverse-seared sirloin steak to take about 1 hour to cook to medium-rare, including searing and rest time. For more done steaks, you might need closer to 1 ½ hours.

Can I reverse sear sirloin steak without a thermometer?

Although you can cook steak without a thermometer using any cooking method, we don’t recommend it. It’s a good idea to check your sirloin steak with a thermometer after cooking it in the oven to ensure that it’s reached the proper temperature range before searing.

Can I reverse sear sirloin steak to medium?

Sure! We recommend medium-rare to avoid creating a tough sirloin steak, but if you’re careful about not cooking your steak too long in the oven, you can still achieve a tender medium sirloin. 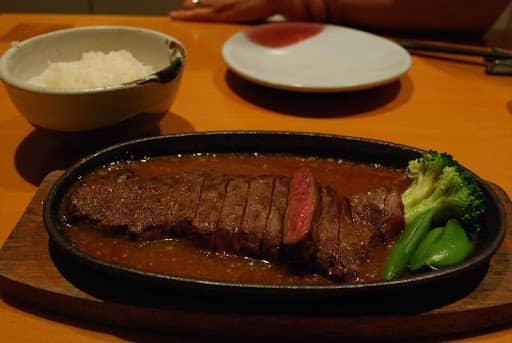