There are many ways to cook a steak. The reverse sear method is one of our favorites, but since you’re here, it’s probably one you don’t know much about. However, it’s a cooking method that we highly suggest you add to your arsenal, especially if you love medium-rare beef. This searing technique leaves a steak’s insides the perfect color of pink, while creating that brown, seared crust you crave.

Moooove over, other searing methods. This one may take a little longer to do than a regular sear, but it’s well worth the wait.

What is the Reverse Sear Method?

As the name suggests, this searing method cooks your steak in reverse from the traditional way you’d sear. Instead of crisping up the outside edges first, and then finishing off cooking it to the proper temperature in the oven, you’ll do the cooking first and the searing second. The result is one incredible, fresh brown crust with just the right texture.

What Type of Cuts Work Well with Reverse Searing?

Some of the most common cuts to use with the reverse sear steak method are thicker cuts that usually need more time to cook than others to cook to the proper temperature inside. Thicker steak cuts, like ribeye and filet mignon, are popular choices. But other thick steak options that work well with reverse searing include strip steak, tomahawk steak, and t-bone steak.

With that said, you can reverse sear just about any steak you love, whether it’s a sirloin steak on the grill or a skirt steak in a cast iron pan. You’ll just need to take more care not to overcook the steak in the beginning cooking phase when you aren’t using thick cut steak. And, thinner cuts generally don’t work as well.

Benefits of the Reverse Sear Method

You might be wondering what benefits the reverse sear steak method has over other cooking methods for steak, like sous vide or regular searing. A significant reason some people prefer to reverse sear a steak over cooking it other ways is to get a more even cook from the inside to the outside. This is especially true if you don’t like a lot of pink in the center. It can be difficult to achieve a medium or even medium-rare level of doneness with the traditional cooking method of a very thick steak, but it’s easily achievable with the reverse sear method.

Another reason the reverse sear steak method can get you a perfect steak is the science that goes on behind the scenes. When you cook the steak for a few minutes before searing it, it allows the surface moisture to evaporate from the steak. Then, when your steak is read to become a seared steak, you won’t have moisture standing in the way of getting that perfect sear, yet you’ll still have a juicy steak inside.

Disadvantages of the Reverse Sear Method

The reverse sear method is great for many of the most popular, thicker steak cuts, but it’s not the right choice for all steaks. One of the biggest disadvantages of the reverse sear is that it isn’t a good option for thin steaks. Thin steaks often cook so quickly, regardless of what method you use, that trying a reverse sear might actually lead to an overcooked steak.

Another disadvantage is that this method can take a little more time to sear steak. If you’re short on time or just want the quickest cook possible, sticking your steak on a cast iron pan or the grill and searing it can be quicker. However, if you have a thick cut that will need a few minutes in the oven anyway after you sear it, the timing will be about the same.

Finally, a pan sauce isn’t as easy to make with reverse sear. Unlike regular searing, reverse sear won’t leave behind those yummy brown and crispy bits in your pan that are often used to make a pan sauce with butter and spices.

How Is Reverse Sear Steak Different from Sous Vide Steak?

Reverse searing often gets compared with the sous vide process of cooking a ribeye steak or another steak cut. While the idea is the same — more even cooking — it’s not the same method and doesn’t produce the same finished product.

Sous vide steak gets cooked in an airtight bag that’s placed in temperature-controlled water. The water helps the meat reach the proper temperature throughout, yet doesn’t dry it out at all because the water never touches the steak.

The reverse sear method is also used to achieve a more consistent cook, but it’s also designed to dry the steak out somewhat, allowing for that rich, crispy sear on the outside. Sous vide steak is usually left as-is after cooking rather than seared. Once a reverse sear steak gets cooked to the proper internal temperature, you sear it to get a browned crust.

How to Reverse Sear Ribeye Steak

Here’s how to reverse sear ribeye or your other favorite thick cuts using your oven, a warmed-up skillet on the stove, and some salt and pepper:

You can use a similar method on the grill too. Cook the steaks over low heat until they’re about 10-degrees below your optimal cooking temperature. Then move them over to the side with high heat and give them a good sear on each side.

Does the Reverse Sear Method Change for Different Cuts?

This method won’t change much for most cuts other than filet mignon or ribeye. The only thing you’ll have to play around with is the amount of time you keep your steaks in the oven and the amount of time each side needs to brown in the skillet. The thicker the steaks, the longer it will take in the oven to reach the proper internal temperature.

Now you know how to reverse sear your steaks for the best crispy crust around! This method is one you can even use with other meats, like pork and chicken, or even your favorite vegetables (they’re fantastic on the grill!). Check out some of the meats you can order online from Chicago Steak Company to get shipped right to your door. Use this guide to sear them to perfection, and check out Steak University for some of our other favorite cooking techniques.

How long should I reverse sear a ribeye?

It takes about 30-60 minutes to reverse sear ribeye steak, depending on the thickness of the steak and the temperature of your oven. Generally, we recommend setting the oven to 275 degrees and cooking to an internal temperature of 110 degrees before searing for 1-2 minutes on each side.

What temp do you reverse sear a ribeye?

We suggest using a temperature of 275 degrees when learning how to reverse sear steaks. After cooking to an internal temperature of 110 degrees, sear over a hot skillet for 1-2 minutes on each side. If using a grill, keep the steak on a low-heat area of the grill for the first step before moving to a high-heat area for searing.

Do you flip a steak when reverse searing?

Yes, flip a reverse sear steak once while searing, just as you would for regular pan-searing. This allows both sides to crisp up during the searing process.

Is it better to sear or reverse sear a steak?

Reverse searing and pan searing are equally good methods for cooking steak. Some people prefer to reverse sear thick steaks that tend to need more time after searing to cook thoroughly on the inside. Reverse searing allows the temperature to rise internally slowly to prevent drying and overcooking, while the searing process locks in juices. 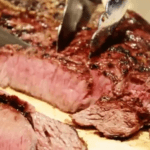 No More Hockey Pucks! How to Reheat Steak the Right Way
4 Reasons Why You Should Buy Prime Rib Online
The Ultimate Porterhouse Steak Marinade Recipe