Most cooks think freezing their steaks means having to thaw them before cooking. Not only are they wrong, they’re cooking drier, less-evenly cooked steaks.

And, really, who can blame them? For years, conventional wisdom has said that you always thaw meat before cooking. Luckily, chefs like Nathan Mhyrvold of Modernist Cuisine and the cooks at America’s Test Kitchen recently decided to put that wisdom to the test, showing us how to cook a frozen steak and why it leads to better beef.

In a feature for the New York Times, Mhyrvold – whose 2000-page, $625 cookbook (we’re not kidding) is the bible of modern cooking science – showed how freezing steaks, searing them with a blowtorch, and then slow-cooking them in an oven produced a better sear and more evenly done steaks.

Luckily for those of us who don’t own blowtorches, Dan Souza at American Test Kitchen did his own video investigation, and found that with or without a blowtorch, keeping your steaks frozen undoubtedly produces better steak.

So why does cooking a frozen steak produce better results than cooking a thawed steak? Simply put, freezing protects the center of your steak from overcooking, eliminating the nasty “Gray Band.”

The perfect steak is a simple equation. Take a great piece of USDA Prime beef, develop a delicious, brown sear, then cook the center to your desired doneness from edge-to-edge. As simple as this equation is, it’s frustratingly hard to get right, and you can thank the gray band.

Cooking your steak frozen is the latest technique to reducing the gray band. A frozen steak will still get up to temperature on the surface, allowing for a crispy, blistering sear. But underneath the surface, the frozen meat takes longer to heat up, resulting in a thinner (almost non-existent) gray band.

This not only means not having to bite through a layer of tougher, overcooked meat on your way to the good stuff, it also means a bigger, juicer steak. In America’s Test Kitchen’s test, they found that a frozen steak lost 9% less moisture than a thawed steak cooked the same way.

How to Cook a Frozen Steak

Cooking a frozen steak works a lot like cooking any other steak. In fact, the important steps aren’t in how you cook your steak, but in how you freeze it.

When you plan to cook a frozen steak, it’s essential that you freeze your steak in a way that prevents excessive moisture build up. This is important any time you freeze meat but is extra important when you cook without thawing.

There are two reasons for this. First, water slows down searing. Second, if you’re pan searing your steak, water will cause dangerous flare-ups when you place your steak in smoking-temperature oil.

It is therefore important that you make sure your steak’s surface stays dry when freezing it. Do this by freezing it overnight on an exposed-air pan lined with parchment paper. The following morning, wrap it in airtight plastic wrap before putting it in a zip-locked plastic bag and back in the freezer. This will prevent moisture from collecting in ice crystals on the surface of your steak.

When you actually cook your steak, make sure to have your cooking oil or grill as hot as you can possibly get it. The cooking surface should reach 500 degrees Fahrenheit, minimum. You should also have your oven preheated to a lower cooking temperature. The crew at America’s Test Kitchen suggests 275 F. Meanwhile, Nathan Mhyrvold recommends preheating as low at 135 degrees Fahrenheit, though most kitchen ovens don’t go lower than 200 F. A lower temperature means a more consistent level of doneness.

Sear your steak for 90 seconds on each side, then transfer your steak to a wire-rack set in a rimmed baking sheet. Slide your steak into the oven and cook it until it reaches your desired temperature of doneness.

Keep in mind that because your steak is frozen, it will take longer to reach your desired level of doneness. Also, the lower the temperature you set your oven to, the longer it will take to cook. We strongly suggest you use a thermometer to measure your steak’s temperature, especially if you’re trying this method for the first time.

While this process requires more effort and a longer cooking time, the results are exceptional: a perfect sear, an evenly done center, and almost no gray band to speak of. To try cooking a frozen steak, check out Chicago Steak Company’s top quality Premium Angus, USDA Prime, and Wagyu steaks.

For more innovative techniques to help you cook a better steak, check out our article on Sous Vide Cooking or our Steak U TV episode on How to Reverse Sear a Tomahawk Ribeye.

Can you cook a steak from frozen?

Yes, you can cook steak from a frozen state when you take the proper steps to store the steak in the freezer to prevent moisture. Do this by freezing steak overnight on a cooking sheet. The next morning, wrap it airtight in plastic wrap, followed by a freezer storage bag or by vacuum-sealing it.

How do you cook a perfect frozen steak?

Learning how to cook a frozen steak is relatively easy. Be sure to start with a hot cooking surface lined with oil. Sear the steak for a couple of minutes on each side before placing it in the oven on 275 degrees to finish cooking to your desired doneness level.

How long does steak take to cook from frozen?

Frozen steaks take longer to cook than thawed steaks. Generally, expect a frozen steak to take about double the time. For example, a medium-rare ribeye cooks in about 10-15 minutes when thawed, but may take closer to 20-30 minutes when cooked frozen.

Can frozen steaks be grilled?

Can you cook steak from frozen on the grill? Yes, just like you can cook it on the stove and finish it in the oven. Start by searing the steak on the grill over high heat. Then, move the steak to a low-heat area of the grill to finish cooking to your preferred doneness. 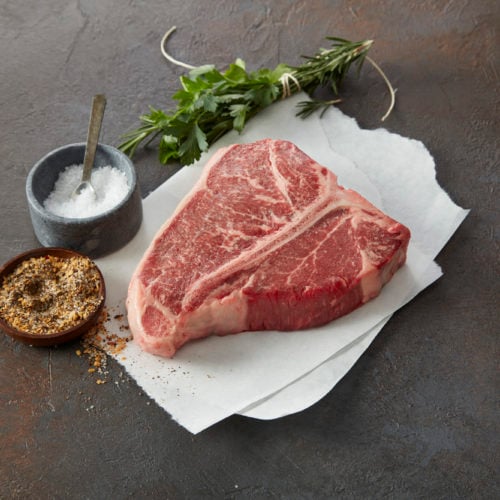 We've explained some of the benefits of cooking steak from frozen instead of thawing it, but how, exactly, do you do it? Follow along with this simple recipe to cook frozen steak in your kitchen and have it ready for dinner.
Print Recipe Pin Recipe
Prep Time 5 mins
Course Main Course
Servings 4 people

How to Make a Cheap Steak Taste Like a Million Bucks
How to Grill Sirloin Steak
Cooking Steak for a Dog: How to Do it Safely