Porterhouse is, by far, one of the most eye-catching steaks you can put on your plate. That’s probably because it’s usually the size of a whole plate, leaving little room for anything else.

It’s also an interesting cut that includes two popular steaks in one — strip steak and tenderloin — giving you loads of flavor and an enticing texture in each bite. But, because of its dual-steak composition, it also requires a little extra care when cooking, regardless of whether you’re grilling, pan-searing, or oven baking.

Follow along with our guide to learn everything you need to know about how to cook porterhouse steak.

What is Porterhouse Steak

If you are familiar with a T-bone steak, then you’re familiar with a porterhouse steak — sort of. These two steaks are similar in that they contain the same cuts of beef. On one side of the bone that runs right through the middle is a strip steak; on the other side is the tenderloin.

However, the porterhouse is a bigger cut than the T-bone. The USDA actually sets guidelines that help distinguish between both cuts. A porterhouse’s tenderloin portion must be at least 1 ¼ inches thick to qualify as a porterhouse. Anything under that, and you’ve got yourself a T-bone.

These hefty cuts of beef can weight two pounds or more, making them excellent options for a steak meal for two (or three or four!). While usually served whole, they can also be trimmed off the bone and cut into separate steaks or sliced thinly for steak salads, sandwiches, and more.

What Cut of Beef is Porterhouse

Before cooking porterhouse with any method, salt it generously on both sides to create a brine that helps it crisp up with a nice sear. Let it sit at room temperature for 45 minutes before cooking.

How to Pan Sear Porterhouse Steak

Cooking Porterhouse Steak in the Oven

How to Cook Porterhouse Steak in the Oven

A light seasoning of salt and pepper works well for porterhouse steak. Be sure to season both sides of the steak with as much salt and pepper as you’d like. You can also add a sprinkle of steak seasoning for extra flavor or some garlic powder, onion powder, or thyme. For something a little different, add a splash of Worcestershire sauce when pan-searing or brush the steaks with it when grilling.

Make a simple marinade for porterhouse steak with one part olive or cultured oil for a to two parts soy sauce, garlic cloves, pepper, and thyme. Marinate the steaks in the refrigerator for at least two hours, or preferably overnight. Allow to rest at room temperature for 20-30 minutes before cooking. 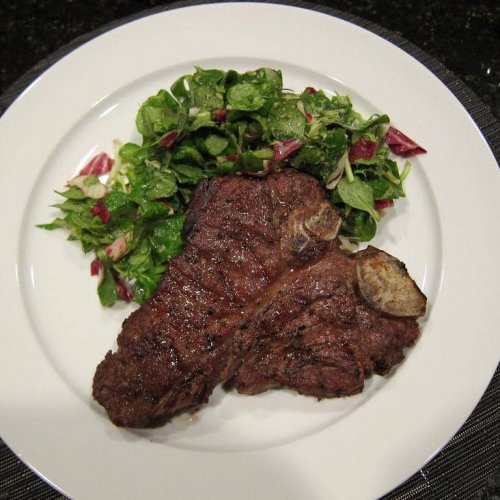 To cook the best porterhouse steak at home, follow these extra tips.

Porterhouse steak doesn’t take long to cook with its most popular cooking methods. Sous vide will take the longest, at about an hour and a half total to sous vide, sear, and rest the steaks. Set aside about 45 minutes to cook and rest a reverse-seared porterhouse steak. Grilling, pan-searing, and oven-cooking a porterhouse take less time, usually about 20-30 minutes total.

Measuring the doneness of your porterhouse steak is the key to getting the finished product you were hoping for. Use a meat thermometer to take the temperature of the thickest part of your porterhouse steak. On this cut, that’s usually the tenderloin side of the bone. For a medium-rare cook, the thermometer should read 130-135 degrees after the steak rests for at least five minutes. Use our steak temperature guide for more help.

Shop porterhouse steak from Chicago Steak Company today to get quality, aged steaks delivered to your door. Our guide will help you learn to cook them, no matter which cooking method you prefer. If you have a grill, fire it up and try our simple grilled porterhouse steak recipe to mimic the steaks you’d get at your favorite steakhouse restaurant.