Are you torn between cooking steak and a roast? A bone-in ribeye roast combines several steaks in one, making it a good option for a family dinner. However, it is more time-consuming to cook than pan-frying individual steaks.

This guide will explain everything you want to know about a ribeye roast and how to cook it.

What is Bone-In Ribeye Roast?

You might also know bone-in ribeye roast as its more common names: prime rib or prime rib roast. This cut results in the flavor and texture you’d expect from a ribeye steak, but because it’s a full roast, you get several steaks in one. Therefore, buying a bone-in ribeye roast could be the way to go if you plan to feed multiple people. Just be warned that it will take longer to cook than ribeye cut into steaks, so be sure to have some extended time available for its preparation.

There’s also the option of buying a boneless ribeye roast. Is one better than the other? Not necessarily, but here are a few key differences you should know about them:

There are a few options for cooking bone-in ribeye roast, each of which yields different results and flavors. Before using any method, prepare the roast by salting it on all sides and allowing it to rest at room temperature for 45 minutes. Then, season with your choice of herbs and spices before cooking.

Bone-In Ribeye Roast in the Oven

When you think of a roast, you probably automatically think of the oven. It’s true that cooking a bone-in ribeye roast in the oven is the most common method. It’s straightforward and doesn’t require much skill, making it a good option for a beginner to an intermediate cook who wants a simple way to cook their roast.

When using the oven, start with a high temperature of 450 degrees for a few minutes to sear the roast. Then, reduce the temperature to 325 degrees for the remainder of the cooking time.

Bone-In Ribeye Roast on the Grill

A bone-in ribeye roast tastes delicious with some smoky flavors from the grill. Whether you use a charcoal or gas grill, you can cook bone-in ribeye roast successfully. Always start by searing the roast over direct flame, followed by a longer period of cooking over indirect heat until it reaches your desired doneness level.

Bone-In Ribeye Roast in a Smoker

Use the smoker when you have plenty of time to cook your bone-in ribeye roast and want to infuse wood-smoked flavor into the meat. We recommend smoking the ribeye roast for about 3-4 hours at a temperature of 250-275 degrees.

If you have a slow cooker with ample space to house your bone-in ribeye roast, try it as your cooking method. Slow-cooked ribeye roast gets so tender that it practically falls off the bone. Plus, it’s one of the easiest methods, as you don’t need to do anything during the cooking process. A ribeye roast needs about 3-4 hours in the slow cooker if cooking to medium rare, so be sure to prepare your meal accordingly.

As you prepare your bone-in ribeye roast for cooking, get familiar with typical cooking times for each cooking method:

To sum up, bone-in ribeye roast is worth considering when feeding multiple people as an alternative to buying several steaks. Simply cook the roast in the oven for a few hours while you prepare the rest of the meal, and it’ll be ready to cut and serve as individual steaks. Our bone-in standing rib roast is available as dry-aged or wet-aged and USDA Choice or Prime grades, each weighing 8-9 pounds. Order today before 4 PM CST to have your order shipped the same day. 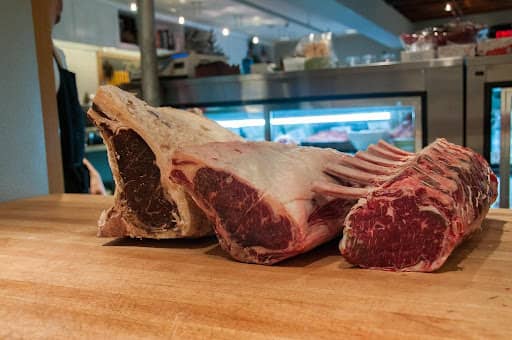 *”Rib Roasts: beginning, middle, and end.” by The Meat Case is licensed under CC BY 2.0

Baseball Steak: Hat’s Off to America’s Pastime
Lamb Meatball Gyros
How to Cook Ribeye in the Oven