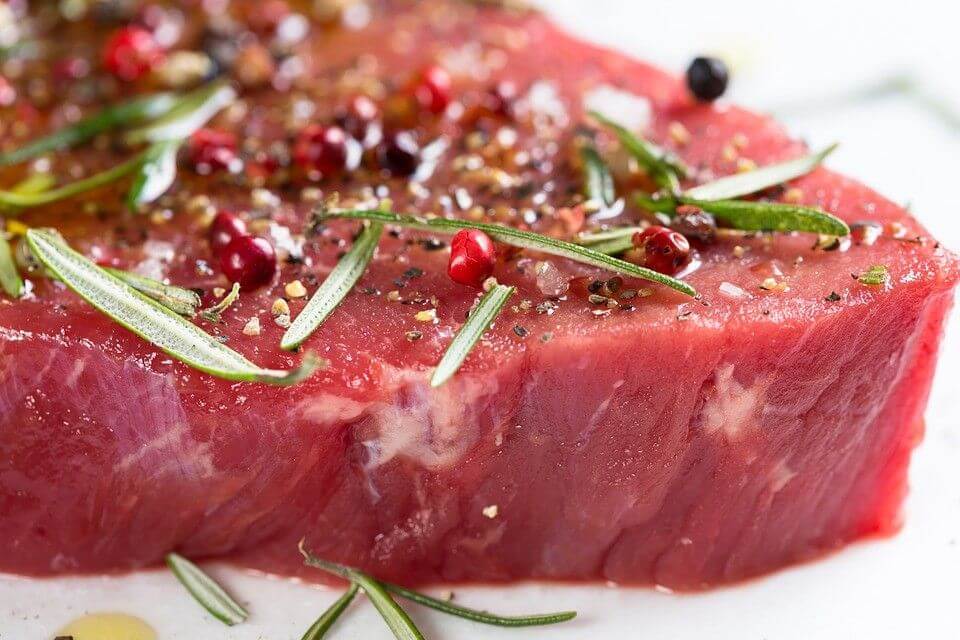 A raw meat diet for dogs is a popular one. It’s supposed to mimic what a dog would eat in the wild instead of feeding them cooked, processed meat that could wipe away some of its natural nutrients. But can humans eat raw meat? That’s something that’s been debated for centuries. We’re going to clear the air on this one with some interesting facts you probably didn’t know about raw meat and how it works with the human diet.

Can I Eat Raw Beef?

You go to your favorite steakhouse and order your steak rare. It comes out looking more like raw steak than cooked. Is it safe to eat? Or, maybe you just prefer the flavor of raw beef over cooked beef (believe it or not, some do!). Is there any harm in chowing down?

There are some steak dishes that are meant to be served raw. Steak tartare, for example, is a raw ground beef patty served with raw egg yolk, onions, and other various ingredients. The thing is, no expert would ever recommend that you make steak tartare at home – unless, of course, you’re an expert chef and know how to do it correctly!

Raw beef can definitely be harmful if it’s not quality beef. Creating a steak tartare from ground beef you pick up at the grocery store is a big, giant no-no. That beef could contain various unknown parts of a whole herd of cows and, if consumed raw, could put harmful bacteria into your gut.

If you order a raw steak from the steakhouse, some may say, “No way!” while others will be glad to do it. The difference? Steakhouses that accept your raw steak order likely use high-quality beef and know exactly where it’s sourced from. They also have highly-trained professional chefs who know how to handle the meat properly, so it doesn’t get contaminated.

Just like raw chicken and pork, raw beef can be problematic and contains its fair share of dangerous bacteria. It’s safer than eating raw chicken or pork, but that doesn’t make it 100% safe. Just a few of the infections or viruses eating raw steak could cause include listeriosis, salmonellosis, and E. Coli poisoning. Cooking beef to a minimum internal temperature of 145-degrees and letting it rest for a few minutes is the only way to ensure that most of the unsafe bacteria that may be lingering on it could be killed.

Eating raw meat doesn’t have to be a no-go, though, if you’re dead-set on doing it. The most important thing you can do is source your beef carefully. Order meat online from a trusted source or head to your local butcher who knows where every slab of his beef comes from. It’s also a good idea to purchase whole slabs of beef and cut it yourself (or watch the butcher do it) to ensure that the meat is coming from the same animal.

Once you take your raw steak home, be sure to put it right in the freezer or fridge if you’re not going to eat it immediately. Store your steak covered, away from other foods and out of the way of anything that could drip on it. Make sure your refrigerator is set at 40-degrees Fahrenheit or below to keep it nice and cold!

Although we don’t necessarily recommend eating raw beef (there are so many things that could go wrong!), it’s not an idea you have to throw out the window. Using the right handling methods and sourcing the beef from only the best places can keep steaks as safe as possible for raw consumption.

What kind of steak can be eaten raw?

In most cases, the answer to “Is eating raw steak safe?” is “No.” However, quality restaurants that serve raw beef do so under strict quality standards using prime-quality meat that’s been handled and stored using proper safety procedures. Still, consuming any raw beef should be done with caution, as it comes with a heightened risk of harmful bacteria.

What happens if you eat a little raw steak?

Many people wonder, “Can you eat steak raw?” Some people do eat the occasional raw steak without getting sick. However, raw beef can harbor harmful bacteria that lead to food poisoning, which could cause digestive side effects like bloating, vomiting, nausea, or diarrhea.

Is pink steak safe to eat?

Instead of asking, “Can you eat steak raw?” consider going for the safer option of medium-rare to medium beef. Medium-rare steak gets cooked to an internal temperature of 130-135 degrees, while medium gets cooked to 140-145 degrees. Both cooks have a slight amount of pink in the center that can be generally safe to eat when the steak has been handled and cooked properly.

How can you tell if steak is raw?

Raw steak is a deep red color with no visible browning on the outer edges, like you’d get from a seared steak. It’s also somewhat cool to the touch and will not bounce back when you use your finger to add gentle pressure to the meat.